by admin
in World
0

On Tuesday 8th November, the Institute hosted His Excellency Nguyen Tat Thanh, Ambassador of the Socialist Republic of Vietnam to the Commonwealth of Australia since November 2020. He has worked for the Ministry of Foreign Affairs Cabinet, the Department of Multilateral Economic Cooperation, the ASEM 2004 and APEC 2017 National Secretariats, and the Department of Southeast Asia, South Asia, and the South Pacific. He was also involved in several bilateral and multinational negotiation efforts, notably the bilateral trade agreement with the United States, Vietnam’s accession to the WTO and the Vietnam-EU Partnership and Cooperation Agreement. After 12 years as Deputy Director-General, he was appointed Director-General of the Ministry in 2013. He was ambassador to Thailand prior to his posting to Australia.

To set the context for his address, Ambassador Thanh recounted Vietnam’s history as a country that had borne the brunt of 2000 years of war and bloodshed. In the 1930s and 40s, striving to gain independence from the French, Vietnam found an anti-colonial ally in the Soviet Union. This led to the formation of the Communist Party of Vietnam and the creation of the Viet Minh.

During World War II Vietnam was a friend of the Allies, but attempts after the war to obtain US support for Vietnamese independence foundered: the US from the mid 1950s took over the French role, re-casting it as part of the Cold War. The US and its allies perceived a need, following the Chinese communist party’s takeover of China, to prevent other countries in the region from adopting communism in a “domino effect”.

French colonialism started its fall in 1954 with their defeat at Dien Bien Phu, but the PRC wanted western support and supported the French at the Geneva Conference, weakening the independence cause by pushing for the division of Vietnam into north and south at the 17th parallel. Vietnam became the “battlefield of big power politics”: the cold war between the US and its allies on one side and the Soviet Union and the PRC on the other “broke out hot” in Vietnam. Ultimately US neo-colonialism failed. In 1979 the US gave China the green light for its border war with Vietnam – but Vietnam prevailed.

Ambassador Thanh described Vietnam’s transformation into a middle power in the region due to its overall resilience and burgeoning relationships with other countries. Vietnam had made sure to be a friend to all countries, including former foes, and had established formal relationships, either strategic or comprehensive, with 30 countries, especially with all the United Nations Security Council members. Vietnam’s 2019 defence policy committed Vietnam to independence without military alliances or foreign bases, and to the principle of no first use of force. In November 2022, the General Secretary of the Communist Party of Vietnam, Nguyen Phu Truong, had successful meetings with Chinese leaders with the aim of consolidating a peaceful relationship.

Labelled by the UN Secretary-General as the “model country” for the developing world, Vietnam had demonstrated growing economic vigour since its establishment as an independent socialist republic. It now had numerous free trade agreements, the most recent with the European Union. Vietnam’s gross domestic product (GDP) had increased 8.86 per cent in the first six months of this year – as far as he knew, the best result in the world. PwC had predicted that Vietnam will be the 22nd largest economy by 2050, in terms of its purchasing power parity (PPP). According to the World Bank, the poverty rate in Vietnam in the last decade drastically dropped from 16.8 per cent to 5 per cent, with over 10 million people being lifted out of poverty. Despite the COVID-19 pandemic, the number of middle-class people is predicted to rise from 35 million to 56 million by 2030.

The Ambassador highlighted the opportunities for bolstering the Australia-Vietnam bilateral relationship, as the countries progress towards celebrating 50 years of diplomatic relations. As a chess player, he saw Australia as a rook, steadfast and straightforward, while Vietnam was a knight, flexible and agile. Australia had now extended support to Vietnam through development assistance for decades, including the My Thuan bridge across the Mekong completed in 2000 – Australia’s largest development aid project – and My Thuan 2, now nearing completion. The two countries shared interests in multilateral organisations and considerable complementarities in infrastructure and natural, human and financial resources; as an example, he discussed the importance of the iron trade.

Australia had played a decisive part in the negotiations which had resolved the Cambodia situation and paved the way for Vietnam to secure its place in the international community, including relations with the US. He recalled the pioneering role of Foreign Minster Bill Hayden in the 1980s in his negotiations with Vietnamese Foreign Minister Nguyen Co Thach.

As a junior foreign ministry official Ambassador Thanh had assisted with the 1987 visit to Vietnam of Tom Uren, Local Government Minister in the Hawke government, who was accompanied by a young ALP official – Anthony Albanese.

In response to audience questions, Ambassador Thanh expressed sympathy for the people of Ukraine and agreed there would be a possible role for Vietnam to moderate current international polarisation. The Vietnamese Foreign Minister had spoken to the foreign ministers of both countries urging compromise. Unlike Australia, Vietnam had not taken a position favouring one side or the other. He noted that Vietnam had played a useful role in providing a neutral venue for US talks with North Korea.

He said that Vietnam is continuing to press not only China but more especially Laos on the negative role of upstream dams on the Mekong, noting that 80 percent of the Mekong’s water originates in Laos.

Asked about progress with regard to the South China Sea and the rival claims to its islands, he said that improved coordination among the ASEAN countries offered positive prospects. Through the Vietnamese General Secretary’s recent visit to China, Vietnam had been trying to stabilise the situation in the most peaceful way possible. Nonetheless, the core principle was that of territorial integrity and sovereignty, and the islands that belonged to Vietnam must be given to Vietnamese territorial control.

Similarly, asked about Myanmar, he stressed the importance of a coordinated ASEAN position and was concerned about any proposal to divide ASEAN on the issue [for example by excluding Myanmar].

Asked whether, within ASEAN councils, Vietnam’s sensible and moderate approach towards dealing with China resonates with the governments of Malaysia, Indonesia, the Philippines and Singapore and whether there is consensus on how to work with China, he spoke about how all ASEAN members are working to coordinate their approach to big powers, including China. The Ambassador praised the knowledge and judgement of senior Australian foreign policy officials in their approach to China.

He agreed that Vietnam and China have a great deal in common culturally, despite centuries of friction. 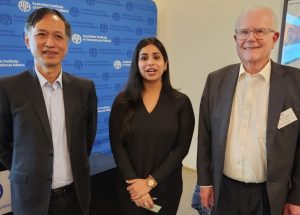